To gain insights into children’s world and how they use play, Sonia Livingstone and Kate Cowan spoke to Paul Ramchandani, a Lego Professor at the PEDAL Centre, as part of our interview series on play in the digital world.

Sonia Livingstone: Tell us how you got into researching play?

Paul Ramchandani: I’ve been interested in the way children use play, and how to use play to explore children’s voices, particularly younger children. It’s one of the few ways we can get an insight into their worlds. It’s not only about how to identify things that have gone wrong but how to create the environment for things to go right.

Kate Cowan: How do you think of play?

Paul Ramchandani: As a set of activities with overlapping characteristics: fun, almost always; self-directed, usually; collaborative, sometimes; not necessarily fulfilling a functional purpose, sometimes. With digital, it’s helpful to not think of good and bad, but of the range of activities. If we could, in the digital and non-digital worlds, ensure that children have access to a range of play opportunities, some of which are about refining skills, some about collaboration, some about having fun, we’ve cracked it.

Sonia Livingstone: Are there children who don’t play or can’t play?

Paul Ramchandani: It’s difficult to identify children globally who have impoverished play in the absence of global impoverishment of other aspects of their environment. The obvious example is Romanian orphans, where the children were in cots. But they have an absence of other things. There are children with particular conditions – with autism – with a diminished ability to engage in certain kinds of play, to an extent. You do see in acutely stressful environments children’s play dropping off dramatically. But as soon as that becomes normalised, children play again.

Kate Cowan: Do babies play and if so, how early – in utero?

Paul Ramchandani: That’s tricky, because, with parent-child play in babies, it’s usually not baby-led, it’s parent-led. What are the characteristics that make it play between parents and children or when babies are on their own? Activities where parents and children are doing the same things: they’re both having input. That changes in the first year of life in terms of who can lead and who is following.

Sonia Livingstone: From a psychiatric perspective, do you see parents who don’t know how to play with their children?

Paul Ramchandani: It’s complex because we draw heavily on our experience of being parented. If you measure playfulness in interactions between parents and children, they’re associated with positive outcomes for children. Interventions that encourage interactions, which are sometimes playful, are associated with positive outcomes. But it’s difficult to disentangle play from warmth and engagement, which are important in their own right.

Kate Cowan: Do you see play and learning as a good channelling of children’s agency, or co-opted for adult objectives?

Paul Ramchandani: Play has value in itself. I’m not opposed to co-opting it for other outcomes if there’s a way of improving children’s health. But I wouldn’t want their only activity to be because it’s good for them. You want children to have time to play and explore on their own, with friends, because that has value.

Sonia Livingstone: Do you think children need to act out their “bad” emotions through play?

Paul Ramchandani: We do a lot with three- to six-year-olds and doll’s houses, to explore what happens in the family in terms of play. This is a snapshot of what might or might not be happening in the real world; it’s the children’s representation. Trauma therapies focus on allowing children to have space to talk about these things. If you shut that down, it’s not healthy.

Paul Ramchandani: It feels like the language has shifted. People are saying there are advantages about digital play, as well as things to think about. When I offer tips to parents of young children there are two issues. One is, allow your child to take the initiative. Notice what your child wants to do. Do it at their pace. Second, think of different kinds of play. Ones that you like, ones you’re comfortable with, but try different ones too. Then map those onto digital play. Offer opportunities for children to do different activities online and offline.

Sonia Livingstone: Why do they get fixated and want to play the same thing over and over?

Paul Ramchandani: Some games are designed for that. They have their own rewards of achievement or competition. It’s hard to think of an exact parallel in the non-digital world, but there are games since the dawn of time where you get drawn into competition and repeat.

Sonia Livingstone: Are there unanswered questions about play that you want to pursue?

Paul Ramchandani: Disentangling processes in early child development around parent-child play and play with peers. Are there specific benefits about playful interactions? Thinking about it as understanding children and elevating their voices in terms of their experiences, both in a health and education context, feels critical. Play’s part of that, but, for younger children, it’s really important.

Sonia Livingstone: What has COVID-19 taught us about children’s play?

Paul Ramchandani: There’s little literature on play in pandemics. For me, that’s a canary in the coal mine. One change is the loss of children’s ability to play outdoors for long periods and I’ve seen that in clinic with individual children, but I don’t know how that generalises.

Paul Ramchandani is LEGO Professor of Play in Education, Development and Learning at the University of Cambridge. He leads a research team investigating the role of play in children’s early development. He also works as a Consultant Child and Adolescent Psychiatrist in the UK National Health Service. 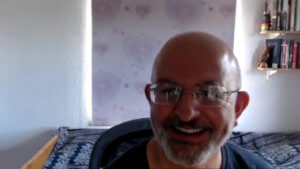