To understand how the culture and concept of play has evolved over time, Sonia Livingstone and Kate Cowan spoke to Wendy Russell from the University of Gloucestershire as part of our interview series on play in the digital world.

Sonia Livingstone: Could you introduce your expertise and how you got into play?

Wendy Russell: As a student I got a job in an adventure playground. It was an era of radical community work; that was my initiation. One of the tensions that faces play advocates is that the people that have power have an instrumental narrative. Play has got to be useful. And that’s usually to do with what children will become –consuming citizens. One of my gurus is Brian Sutton-Smith (1999). He says what children do when they play is take what they know and turn things upside down to make the world less scary or less boring; to make life worth living.

Kate Cowan: How do you define play?

Wendy Russell: It’s an adult game, defining play. I’m less interested in the what and the why, and more in the how, now. Our three mantras are that play is freely chosen, intrinsically motivated or personally directed. But we can challenge this.

Sonia Livingstone: How can the design of the digital environment be planned for?

Wendy Russell: Children like loose parts, stuff that they can move around and manipulate. Play happens anywhere and everywhere. Offline, the biggest barrier is the car; if we were serious about children’s right to play, we would do something about car ownership. Another barrier is fear of stranger danger. It’s not that the reality doesn’t exist, but fear is mediated by other things.

Sonia Livingstone: So, spatial justice is a key principle?

Wendy Russell: Henri Lefebvre (1991), a French philosopher, talks about production of space through relations between three co-existing moments. These are relations of power. The bus stop is designed in conceived space to keep the economy going; people wait there, get on a bus and go consume or produce. The second is spatial practice or perceived space: people wait, get on a bus, go to work, come home, it’s humdrum. What brings things to life is the third moment, lived space. Young people use bus stops to hang around in. People find that threatening. This illustrates spatial justice; who has the power. Children are welcome in the places we designate for them; they’re only welcome elsewhere if they play by our rules.

Kate Cowan: Play is often co-opted to serve adults’ objectives. Why, and is it always bad?

Wendy Russell: I don’t think it is always bad. You may as well teach children in ways they find enjoyable. Where it’s tricky is, to get funding for play, we have to say that we can do something else as well. One of the models I’ve been developing is to say, how is the space working? We like the idea of children’s agency, of play as freely chosen, but it emerges from whatever is to hand in opportunistic ways.

Sonia Livingstone: You identify agency not simply as a child choosing what to do, but in a community?

Wendy Russell: It’s not just other children, it’s everything in the space, including material objects. One of the playgrounds I work with has a really high jumping platform. When children jump, the grins on their faces are enormous. The dominant justification of risky play is that it teaches children to assess risk. That’s not why children do it, they do it for the thrill. During lockdown, I played with my granddaughter on Zoom; you can do all sorts of things. If you go back to Lefebvre’s triad, lived space on Zoom is interesting. Some play workers built an adventure playground in Minecraft; the first thing kids did was destroy it.

Kate Cowan: How do you see digital technologies as changing possibilities for play? What changes would you like?

Wendy Russell: If you say, my ideal play space would be where I could hide or climb or shout or be quiet, you might look at the physical design of the space, but also the atmosphere. For online, that’s interesting. If you go back to how space is produced, what’s the atmosphere in a multiplayer game?

Sonia Livingstone: Is the way some games or online spaces are designed not good?

Wendy Russell: The way Fortnite is designed is that there are no breaks. If there were levels, that might help. ‘Free to come and go’ is a principle of playgrounds and should be a principle of online play as well.

Sonia Livingstone: Do you see a politics of children’s play – children versus adults?

Wendy Russell: Hanging out in a bus stop is a disruption, it’s not what it’s meant for. Children’s play disrupts adult control of time and space, except for when adults say this is when you can play. The rest of the time, it’s seen as misbehaviour.

Sonia Livingstone: Are there lessons from COVID for children’s play?

Wendy Russell: People have come together, often assisted by online communication. Saying, let’s sit in front of our houses and stay apart, but be together. There was a moment when we thought life will be different, but I’m losing optimism. Streets were quieter, less traffic made it safer for children. But cars have again become dominant. The virus has cropped up in children’s play, like a story I heard from a playworker where children were popping bubbles from a bubble machine – the bubbles were the virus. This shows how play emerges from whatever is to hand, including viruses.

Dr Wendy Russell is a researcher and educator on children’s play and works part-time on the MA Professional Studies in Children’s Play at University of Gloucestershire. She has worked in the play and play work field for some 40+ years, and her research focuses on supporting children’s right to play, particularly in terms of the politics of space, policy and ethics. She is the co-founder of the biennial international Philosophy at Play conference and is on the editorial board for the International Journal of Play. 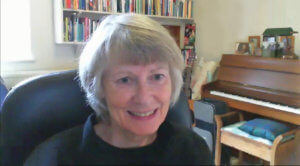