To understand research and advocacy work on childhood and play, Sonia Livingstone OBE and Kate Cowan spoke to Tim Gill as part of our interview series on play in the digital world.

Kate Cowan: How would you define play?

Tim Gill: Everybody rightly talks about the importance of intrinsic motivation. I am also interested in how play allows children to practice what it feels like to be an agent: to make a difference in the world. I defend the importance of autonomy and the choice of the child. I am frustrated at the focus of the education system on measurable outcomes at the expense of other learning processes. We should be more interested in self-efficacy and resilience.

Sonia Livingstone: Is there a boundary to play? Something that is not play?

Tim Gill: Play is the vehicle by which children stop being bored, where they explore emotional boundaries, what it feels like to be in control of being out of control. They’re turning the world on its side. That’s where you see the mischievousness, sometimes the unpleasantness, of play. It’s interesting because it’s something adults have a problem with.

Sonia Livingstone: Why has children’s play become a passion for you?

Tim Gill: With children’s play, unlike other areas of children’s lives, the questions and issues are more fluid, and more is up for grabs. Children are intrinsically playful; they’ll play whenever they get the chance.

Sonia Livingstone: What about your emphasis on urban planning and design?

Tim Gill: I focus on urban planning and design because it raises fascinating questions about children’s changing relationship with the wider world. Children are spending more of their lives removed from the wider community, in institutional settings, and at home. That is under-explored. I sometimes talk about ‘everyday freedoms’ instead of ‘play’, because ‘play’ is often associated with being trivial. I argue in my book No Fear that our job as adults is to create opportunities for children to learn how to be more resilient: to move away from a philosophy of protection. That feeds into a more creative approach to playground design, for example. The work around risk/benefit as a conceptual device, but also as a practical tool, has had a big influence.

Sonia Livingstone: What are the key design features that have changed in playgrounds?

Tim Gill: First, an acceptance that some risk is good, that a zero-risk playground is a practical, if not logical, impossibility. Playgrounds should offer opportunities for risk. Secondly, the breadth and creativity of designs. Third, risk/benefit assessment as a process. There is less of a stranglehold of industry standards with highly technical rules. It is seen as guidance, supplemented by risk/benefit assessment.

Kate Cowan: Play is sometimes co-opted to serve adult objectives. Do you see that as a problem?

Tim Gill: Children learn better when they’re having fun; so I don’t have a problem with playful learning. But it’s essential for children to spend time where adult concerns fade into the background. You can picture a triangle of Play, three features that need to be in place for play to emerge: first, physical space – which could include digital space – but there needs to be physical objects; second, time; third, adults that give permission, or – in effect – look away. I add another essential feature: other children. Some important interactions in play only emerge when children are around other children.

Sonia Livingstone: Maybe we could take the Triangle of Play into thinking about the digital world?

Tim Gill: The arguments about children’s experiences in the digital world, and play and risk, have close parallels with the physical world.

Sonia Livingstone: I’ve seen two barriers to change. The regulator view and the popular media which, every time anything goes wrong, calls for protection.

Tim Gill: Yes – but the media also sometimes takes the opposite view. Popular media in the 1990s highlighted extreme expressions of risk aversion, such as the banning of conkers. Even the Health and Safety Executive realised it was a problem, because they were getting blamed. It wants to achieve a risk-intelligent workforce. If we don’t allow children to learn how to manage risks, how can we expect them to do so when they’re older?

Sonia Livingstone: How important do you think unobserved play is?

Tim Gill: I fly the flag for a degree of benign neglect. An essential part of a good-enough childhood is for there to be time where children feel not, ‘I’m on my own’, but ‘there are no adults around me who are going to catch me if I fall’. I remember shivers running down my spine when a parent once told me: ‘My daughter is 16 and I make it my job to know what she’s doing every second’.

Kate Cowan: What words applying to play could be brought into the digital world?

Tim Gill: Play is often rule-based, but children can change the rules, that’s a difference between play and sport. Playworkers talk about low intervention, high response: being aware, and ready to help or step in if needs be, but in general remaining in the background. I have some worries about the idea that your job as a parent is to constantly be a playmate for your child. There is value in space where adults are not present. In one nursery I visited, if they saw a child having problems or in distress, they would typically wait 17 seconds before stepping in, to foster their resilience.

Sonia Livingstone: What has COVID-19 taught us about children’s play?

Tim Gill: I have been angry at how little policy attention has been devoted to children. If we want a long-term collective view of our neighbourhoods, bringing children into the conversation is important.

Sonia Livingstone: Is there anything else?

Tim Gill: I worry about the amount of time very young children are spending in the digital world. Like play and risk, you have to recognise younger children’s circumstances. For example, three-year-olds consuming YouTube videos on a loop. It’s about the other experiences that children are not having.

Tim Gill is an independent scholar, advocate and consultant on childhood. He focuses on the changing nature of children’s play and free time, and their evolving relationships with the people and places around them. His work cuts across public policy, education, childcare, planning, transport, urban design and playwork. It engages with academics, practitioners, policy makers, the media and the wider public. 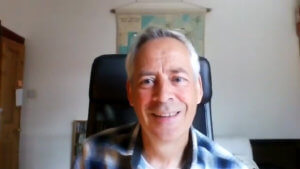