Sonia Livingstone: Where did your interest in play come from?

Katie Salen Tekinbas: I run a non-profit with Mizuko Ito, called Connected Camps, where we train college students as online educators for children, using games. We try to understand how games empower children to play in productive ways. Most virtual environments are about surveilling children; designed around productivity, they limit risk. I became interested in the structure of games, the play that they produced, the relationship between formalising play while letting children improvise. One can produce freedom. Play is the most joyful human thing and we educate it out of children. We need to bring it back.

Kate Cowan: How do you define play?

Katie Salen Tekinbas: I talk about free play within a more rigid structure. There is a mindset when one is at play. How do you design permission slips for people to enter that space? That’s a formal thing. Karaoke is an example. Rifling through the songbook gives people a chance to build courage to step into that. When designing I think: how do you keep people engaged? When disruptive things happen in play spaces, that pulls people out. When it’s an individual child at play, they’re making rules; structures to push against.

Sonia Livingstone: The designer has to design the permission slip, the space, the social relations?

Katie Salen Tekinbas: All of those. You design the interactions you want that space to support. When they are designed well, players don’t see them. When they’re limiting, players get frustrated. It’s connected to learning. When you are at play, you are pushing against the rules. That’s what makes it fun. Players try to make the system legible. This is true in online spaces. A lot of it is about transgression and transformation.

Sonia Livingstone: Does the designer design a world that is deliberately breakable?

Katie Salen Tekinbas: Players will do things in spaces that were never intended. What happens is you have an idea, you build a prototype, you put players into it, watch them. You then build on it. Play is voluntary. A player can leave. You are trying to design spaces so players want to be there. That’s not to say that you can’t have a vision, because you can shape behaviour.

Kate Cowan: Sometimes play gets co-opted to serve adult objectives. Is it a good thing?

Katie Salen Tekinbas:  It can be done in nice ways and negative ways. With learning, you want students to want to do it. Play is a model with a sense of engagement. When people play, they’re problem solving; being creative, coordinating. When you play with another, you adjust in terms of what the other person wants. Gamification, I’m very against it. It comes from tapping into these dark patterns, behaviours that work in games, but layered on top of something that isn’t a game.

Katie Salen Tekinbas: It’s taking things out of context. Games and play, they’re systems; they work together. When you take something out of the relationships that it had in the context of a game, it’s operating in a system that is less about player-led things and more about driving player behaviour.

Katie Salen Tekinbas: Any digital environment is designed, so you’re starting from intentionality. What has been lost in the past few months [during COVID-19] is play spaces in the real world. What happens in the online world is an overcorrection. Adults don’t want kids to make mistakes online. How do you reconceptualise spaces where children are not policed, but cared for, in appropriate ways? In most games, when bad stuff happens, it’s reactionary. You kick a player out. If you see it as a learning space around social norms, around governance, you design it in different ways.

Katie Salen Tekinbas: Improvisation. Classrooms are becoming increasingly rigid. As I think are homes. It is a control issue; kids lose the ability to improvise. It is at the heart of free play to recognise, ‘I could try that’.

Kate Cowan: Is it possible to have secret spaces online?

Katie Salen Tekinbas: If you look at interest-driven communities, they’ve discovered ways one can keep one’s writing, for example, private. There’s a worry about letting kids do things unmonitored. There are play spaces where nobody can see what you’re doing. Although the administrators can. I think the thing is, from a design perspective, to enable kids to take risks, to transgress, in ways that keep them safe and are appropriate.

Sonia Livingstone: When is it surveillance and when is it duty of care?

Katie Salen Tekinbas: Surveillance is watching when there is no need to watch. When kids are at the right age where they can monitor each other, they do. If something’s gone wrong, they get an adult.

Sonia Livingstone: Is there anything else you wanted to say?

Katie Salen Tekinbas: Yes, because of COVID, parents have a chance to pay attention for longer periods to what their kids are doing. There’s this recognition of, ‘You made that game?’ Before, they never gave kids time to do it, or it was out of their view.

Katie Salen Tekinbaş is a Professor in the Department of Informatics at the University of California at Irvine, as well as Chief Designer and co-founder of Connected Camps, an online learning platform powered by youth Minecraft experts. She teaches in both the Game Design and Interactive Media program and the Masters of Human Computer Interaction and Design, working with students to design and develop interactive experiences and technologies that are social, equitable, and connected. She is the founding Executive Director of Institute of Play, a member of both the Connected Learning Research Network and the Connected Learning Lab, and has held tenured faculty positions at Parsons, the New School for Design, University of Texas at Austin, and DePaul University. 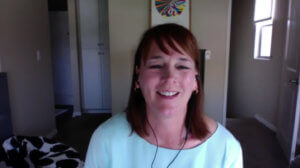