Sonia Livingstone: How did you become interested in play?

Gerison Lansdown: I wasn’t a play expert. But I realised that the right to play speaks to the essence of childhood. Yet it’s so belittled and marginalised.

Sonia Livingstone: Why does play seem like the essence of childhood?

Gerison Lansdown: There are two strands: one is that play is important for children’s physical, social, psychological, emotional, cognitive development. Play as an instrumental, critical means to an end. Then, that the essence of childhood is about creating opportunities for children to experience play as joy, as an end in itself, while also building skills and learning.

Kate Cowan:  How do you think of play and how you define it?

Gerison Lansdown: [In developing the UNCRC General Comment on the Right to Play], we defined it as behaviour, activity or process, initiated, controlled and structured by children. Play can happen anywhere. It’s non-compulsory, driven by intrinsic motivation not external goals. It’s characterised by fun, uncertainty, challenge, flexibility, non-productivity. Play tends to be associated with younger children, but teenagers also play. By contrast, recreation is defined as activities with a function: artistic, sporting, community engagement.

Sonia Livingstone: How does joy fit with rights? Is it the state’s job to create joy?

Gerison Lansdown: There’s a role for the state in creating environments that allow opportunity for play. Children don’t have a right to joy, they have a right to activities which enable the possibility for joy. Playgrounds are not enough, if they’re controlled by adults. In Brazil I went to an area where children had said there’s nowhere to play. The local municipality allocated a derelict space for a playground, which the children themselves were supported to design and manage. Not only was it then a space where they could play and have fun, but one where they felt a sense of ownership and pride.  But then we discovered that it had been built where the local teenagers hung out, and they felt ousted from “their space.” So then investment had to be made to explore how their needs could be addressed.

Kate Cowan: Play is often co-opted to serve adult objectives. Why, and is channelling of children’s energy good?

Gerison Lansdown: Play is too often seen by adults as deficit time. For example, girls in a rural community in Kenya described how they were expected to use all their time functionally – for school, homework, domestic chores or child care. Play was not allowed or tolerated.  If the girls snatched time for themselves, parents were punitive. Parents and teachers co-opt spaces to adult-designed ends. They were going to have no playground at a school, as they said children would be so stimulated by the lessons. There’s also tension about the role of the parent in play. Children need to be able to play without adult control or supervision. But also, parents need to learn to play with children; children benefit enormously from that.

Kate Cowan: Is it still play if adults are co-opting it?

Gerison Lansdown: They are taking away children’s choices. Parents can provide opportunities for positive developmental outcomes by creating spaces and allowing children choices. It’s not play if the parent is controlling it. There’s a wonderful video made by a German filmmaker where she shows pre-school children sharing swings, creating games, and managing negotiation without adult intervention. Learning was coming from the children themselves; it was self-organised.

Sonia Livingstone: It’s hard for adults to believe children will spontaneously learn something of value.

Gerison Lansdown: It’s appropriate for adults to intervene if a game involves, for example, racist or bullying behaviour. There are boundaries in the exercise of our rights, which involve not violating the rights of others. Part of what children have to learn is to negotiate this.

Gerison Lansdown: Joy is part of play, but not the whole picture. For children in humanitarian crises, a lot of play is working out the suffering, loss, and anxiety. It’s more complex than just joy.

Sonia Livingstone: What argument can we mount to say risk is part of play?

Gerison Lansdown: It’s about children testing boundaries, working out what’s risk, that not all risk is harmful. When I was little, there was a swimming pool we used to go to with no staffing. We couldn’t swim. I was seven; the oldest was nine. My parents were not neglectful, it was normal. What constitutes risk changes according to the cultural environment.

Sonia Livingstone: How do we think about play from age 0 to 17 and relate it to children’s evolving capacities?

Kate Cowan: How do you see digital technologies changing the possibilities for play?

Gerison Lansdown: It offers enormous opportunities. Children can develop their own environments. The downsides are: loss of privacy; manipulation; false information; how the digital reinforces stereotypes; children being bullied. In the UN Convention on the Rights of the Child, nowhere does it give children complete autonomy about decision-making in the way that adults have. But they have a right to be heard, to express views and choices. There’s onus on creating a balanced life. You wouldn’t allow a child to choose only junk food. It’s about balancing this through the prism of capacities and best interests.

Gerison Lansdown: As children move into adolescence, the role of peers becomes infinitely more important, being able to have an identity through engagement with peers.

Sonia Livingstone: Is play a Western idea? Are we imposing Western norms?

Gerison Lansdown: It’s deeply gendered. The Kenyan girls talked about how boys could play football, never the girls. Childhood ends earlier than in the West. Many countries in the South are extending economic dependency to age 18. For example, I was doing a study in Bangladesh 15 years ago. Kids were free to self-direct their own play until age eight, when they were recruited into the stone industry.

Sonia Livingstone: What about commerce?

Gerison Lansdown: Some toys are wonderful, but there are many toys that deny imagination; because they’ve pre-recorded speech, the doll is already defined. What’s stolen from children is the potential for creative use.

Gerison Lansdown is an international children’s rights consultant and advocate who has published and lectured widely on the subject of children’s rights, and previously founded and directed the Children’s Rights Alliance for England. She was actively involved in the drafting of the Convention on the Rights of Persons with Disabilities, is an Honorary Fellow of UNICEF-UK, an associate of the International Institute for Child Rights and Development in Victoria, Canada and co-director of CRED-PRO, an international initiative to develop child rights educational programmes for professionals working with children. 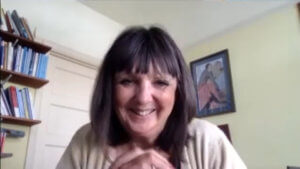