To understand the constraints that the adult world places on play, Sonia Livingstone spoke to Professor Ann Phoenix of the UCL Thomas Coram Research Institute, as part of our interview series on play in the digital world.

Sonia Livingstone: Can you offer a definition of play?

Ann Phoenix: One is the imaginative component; the recognition that it sets aside what people think of as real life. Although, that’s perhaps simplistic because it is engagement in real life. But the notion that you can try out things that you wouldn’t have permission to try, outside the context of play. The other is that it is developmentally important, for developing social skills, cognitive skills.

Sonia Livingstone: What are your thoughts on how adults design worlds that facilitate the opportunity to play, within constraints we have given?

Sonia Livingstone: What about symbolic or normative constraints?

Ann Phoenix: They’re abstract, but they’re not invisible. For example, children are aware from early on that the world is gendered. More interesting is how strong those perceived rules are, and that children often deepen these. The normative is very much part of what they understand.

Sonia Livingstone: We’ve been thinking about play as involving transgression?

Ann Phoenix: Play is political with a small ‘P’, in that children are already born into political systems. One of the things they’re quickly learning is their place within those systems. The transgression and reproduction of the norm are both part of play.

Ann Phoenix: There is no harm in using media that children use already, rather than imposing ways of learning that they wouldn’t usually think of using. As long as it’s not coercive and they have time to play in ways they want to. With lockdown, children often had to be left to their own devices while their parents had to get on with employment tasks.

Sonia Livingstone: In what ways has lockdown been good or bad for children?

Ann Phoenix: The first thing is that lockdown has been infinitely different for children with different amounts of resources. The differences have been stark.

Sonia Livingstone: How does the digital environment support or undermine children’s play opportunities?

Ann Phoenix: Digital ‘kinning’, which was a transnational migration term, has come to the fore with grandparents. For grandparents who are digitally connected, it’s been a way to continue to enjoy their grandchildren. It’s also allowed space for parents to get on with work. Young children can speak to Alexa and Siri and sometimes get things that their parents don’t want them to. I’m not advocating this, but digital environments have been useful for many children. Someone told me that she heard her child saying, ‘I love you Alexa, you’re my best friend’. I don’t think that’s sad, I think that this technology is helpfully there at moments when you want responsive, and apparently indulgent, communication.

Sonia Livingstone: How could the internet be improved?

Ann Phoenix: Social justice – the sexism and racism implicit in digital content, particularly gaming. We need more recognition of the pervasiveness of racist and sexist tropes for children or adults on digital platforms. We need a shift away from the taking-for-grantedness that the norm is white, middle class male.

Sonia Livingstone: Do you see the digital world as, ‘let children be children and play’, or children as young citizens with a politics?

Ann Phoenix: I’m not into those binaries. because children’s play is frequently political, even if only implicitly so, because it reproduces ways of being in the world.

Sonia Livingstone: Do you think 12 or 13 is a good age for children’s digital independence?

Ann Phoenix: Children have some forms of digital independence as soon as they’re able to go on particular platforms. It’s one version of independence; they’re never going to get full independence, because they are limited by what’s available online, for good and ill.

Sonia Livingstone: What would it look like to protect children from sexism and racism? Is it about segregating them, or changing the world?

Ann Phoenix:It has to be changing the world. It’s certainly not segregating them. These issues are being talked about in terms of Black Lives Matter in a way that they were not before. It’s not about protecting children from content their peers are using on the grounds that representation of black children is reprehensible. You wouldn’t want to stop them from having cultural knowledge that other children do in order to protect them from racism, but it is crucial to stop the racism and improve representation. Another thing is children who are hungry in Britain. Some people have a terrible struggle with lockdown and some children have lost weight during lockdown. They can only be protected if the political, socioeconomic context is changed to ensure that all children are able to be well nourished.

Sonia Livingstone: Does play and the imagination have an importance, or is it squeezed out by constraints?

Ann Phoenix: Children don’t stop playing because they’re hungry, I don’t think they necessarily understand the discrepancies between their lives and lives of others who are wealthy. But many studies have shown that they do understand being impoverished, and what that means for their lives.

Sonia Livingstone: Is lockdown transforming our idea about family life and what children need?

Ann Phoenix:It absolutely will. For some, home is not a comfortable space, because people are forced together more, but lockdown has been transformative for everybody. The meanings and practices of home will have to be renegotiated, particularly for younger generations.

Professor Ann Phoenix is Professor of Psychosocial Studies at the Thomas Coram Research Unit, in the UCL Institute of Education. Her research interests are psychosocialand intersectional, including motherhood, family lives, social identities, young people, racialization and gender. She has particular interests in qualitative and mixed methods, re-use of data and narrative research. 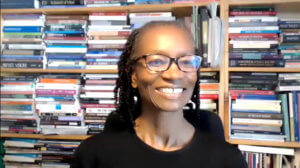