To learn about research on children’s digital play cultures, Sonia Livingstone and Kate Cowan spoke to Andrew Burn from UCL as part of our interview series on play in the digital world.

Sonia Livingstone: How did play become one of the themes of your research?

Andrew Burn: It’s partly to do with my past as a teacher. One day I was taking Year 7 kids on a trip and I could hear three girls singing and clapping behind me. I began to understand that there was a world of poetry, patterned language, physical play, mixed with hymns and songs. I later began working on video game projects and realised that this world of play, mediated by avatars and the virtual world, was not that remote from the playground. Then I realised that a lot of the methods I’d used for teaching in the classroom were game-like. We used to teach the song of Hiawatha and the year 8 groups would become tribes of the Iroquois and chase each other.

Andrew Burn: One of the most helpful books was Brian Sutton-Smith’s The Ambiguity of Play (2009). As Sutton-Smith points out, adults see play as relentlessly pro-social and developmental; by contrast there are forms of play that make adults uncomfortable, involving fantasy violence or adult aspirations. I also find useful the proposal by Roger Caillois to see play as a form of mimicry. The play that he calls agonistic is a helpful way to think about combat-based play.

Sonia Livingstone: Do children develop different games or kinds of play from those adults script for them?

Andrew Burn: There is an argument that children make games out of crumbs from the adult’s table. One example we had was a group of girls playing with hula hoops in the playground. Although they were using pre-existing structures, they were inventing new structures, or combining them with structures that they knew from video game culture. The rules become more elaborate and they test them out as they go. You can draw a line from that to teenagers, with the software we developed in Mission Maker. The first thing kids do is design the game world. Then they explore it: they walk around in this space they’ve created. Then they introduce rules, through programming and characters.

Sonia Livingstone: When you look at the way games are designed for children, to what extent do games afford these possibilities?

Andrew Burn: In the Harry Potter games, they’re driven towards the final confrontation with Voldemort, so you might think there’s not much room for creativity. But when I’ve looked at kids playing those games, it’s more about the player experience. I’ve seen kids looking at Filch the caretaker and his cat, who are not interactive characters, and decide to make the avatar character jump on the cat’s head. In spite of the technical constraints of the game, they can turn the play into a transgressive, disruptive event.

Kate Cowan: Children’s play is often co-opted to serve adult objectives – do you see this as a good channelling of children’s energy?

Andrew Burn: I would support the tradition of play that emanates from Rousseau, from the romantic tradition of education as being related to agency of the child and involving play. My worry is if it becomes relentlessly developmental and loses a sense of the anarchic, irrational, dark aspects of play that are important to childhood.

Kate Cowan: What does play mean in a digital world, and how do you see digital technologies changing possibilities for play?

Andrew Burn: During the Making Games project, we had a boy who was extremely game literate, he was extraordinarily knowledgeable. He’d found games where there was an open level which handed over the ability to construct the level and he moved from that into using Mission Maker to construct his own games. But that takes me back to the girls in the playground designing games with their hula hoops.

Kate Cowan: Are there changes that you’d like to see in digital technologies and play?

Andrew Burn: There’s an interesting question of how they’re recognised in the school curriculum. If it’s okay for teachers to show film adaptations, then there’s a strong argument for incorporating videogame narratives. I think video games get a bad press. It’s beginning to change with Minecraft, as teachers are recognising the value, but that’s tied to the STEM curriculum and there’s a failure to connect that to the Arts. Games need to be appreciated as cultural objects, as forms of transmedia storytelling. There are arguments for using them to transmit content, but that’s a secondary argument.

Sonia Livingstone: What do you think are the implications of COVID-19, and how might we approach play differently?

Andrew Burn: Part of me wants to say, it’s not a new story; narratives of pestilence and plague have always been part of children’s playground games. I imagine there will be more of this, and an updating of them.

Sonia Livingstone: What should we have asked you that we haven’t?

Andrew Burn: There’s a place in children’s culture for the ogre under the bed. What would Hans Christian Anderson look like without it? With video games, the great and the good say there’s no place for violence, but there’s confusion between violence as knife crime, as opposed to violence like a sword in the hand of a wizard. It is qualitatively different, and children know that.

Andrew Burn is Professor of English, Media and Drama at University College London, and director of the DARE centre (Digital | Arts | Research | Education), a research collaboration with the British Film Institute. He is also director of MAGiCAL projects, an enterprise developing game-based software for education, in particular the game-authoring tool Missionmaker which features in several of his research projects. 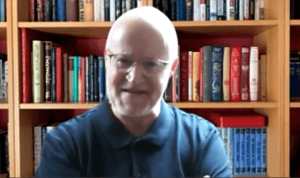